What Are Your Rights Over Your Remains?

The Montana Right of Disposition Act allows a person to provide instructions for disposing of his or her remains or to designate an agent with authority to make such decisions.

During a family get-together, Margaret announced to her four children that she wanted to be cremated after she died. Two years later, Margaret passed away. While her daughter wanted to follow her mom’s wishes, Margaret’s three sons disagreed. Because the local mortician was faced with following the direction of the majority of the children, Margaret was buried in the local cemetery. Years later Margaret’s daughter still refuses to communicate with her three brothers because they didn't honor their mother's wishes about what she wanted done with her body after she died.

Jack told his two children from his first marriage that he wanted to be buried in the small cemetery that bordered his ranch land. After Jack’s death his present wife decided that he would be cremated and that she would keep the urn containing the remains. While Jack’s children strongly objected, the surviving spouse’s preferences prevailed over the wishes of his children.

These are examples of situations that have occurred because of uncertainty under prior law about who has the right to make decisions about a deceased’s remains. With the enactment of the Montana Right of Disposition Act, Montanans can now provide “disposition directions” and know that their choice has legal priority over any of their survivors’ wishes.

The act allows Montanans who are 18 years of age or older and of sound mind to arrange for funeral goods and services as well as to indicate what they wish to be done with their bodies or remains after death. Any one of the four methods below provides legal authority for the deceased’s wishes to have priority over the preferences of survivors:

Example A: Carl visited his local mortuary and made arrangements for his funeral and burial. He signed a prepaid funeral contract and placed a copy with his letter of last instructions. He also briefly explained his wishes to his wife and children and told them these documents were in his file drawer in a folder labeled “Letter of Last Instruction.” For further information, see the MSU Extension Montguide, Letter of Last Instructions, MT198904HR.

2. Written Disposition Direction: A second method for making a disposition direction under Montana law is a written instrument that can be typed, handwritten, or computer generated. The person and two witnesses (all must be at least 18 years of age and of sound mind) must sign the written instrument. Letters of last instructions, a will, a trust document, a power of attorney, or a health care directive that contains specific instructions about the disposition of the deceased’s remains, will qualify as a written instrument if signed by the deceased and two witnesses.

Example B: Robin wrote a letter of last instructions in which she indicated that she wanted to be buried in Highwood Cemetery in a coffin made of white pine harvested from the family’s forest land. Robin requested that during the funeral service her good friends, Jane and Katelyn, share a couple of funny incidents about their years of growing up together. Robin signed the letter, and asked two of her neighbors, both of whom were over 18 years old, to witness and sign it.

3. Signed Affidavit: The third method of making a disposition direction under Montana law is an affidavit. A person can authorize another person to control the disposition of his or her remains in an affidavit that is signed before a notary public.

Example C: Jeff wants his wife to decide how to dispose of his remains. He feels that his wife would reach a decision that would comfort her, their five children and other family members. Jeff prepared a written affidavit designating his wife as his agent to dispose of his remains and signed it before a notary public. If Jeff wanted to limit his wife’s decisions, he could attach specific instructions to the affidavit. For example, he could direct her to choose whether to have his remains cremated and scattered among the wildflowers or have his body buried in the local cemetery.

4. Videotaped Disposition Direction: A fourth method of providing a disposition direction under Montana law is a video. A person can record a video in which his or her disposition preferences are described. A written confirmation of the video’s existence and accuracy must be signed by two witnesses who are at least 18 years of age and of sound mind.

Example D: John asked a friend to videotape him explaining that he wanted to be cremated after his death. John requested that his family have a “Celebration of Life” service. He asked his wife and two children to scatter his ashes along his favorite riding trail. John’s two close friends, who were over age 18, were present at the videotaping. John’s friends each signed and dated a written confirmation of the existence of the videotape.

Figure 1 is a sample affidavit that is provided in the Montana statute for granting authority to another person to make decisions about the disposition of a deceased’s remains. The sample affidavit can be downloaded at: https://www.montana.edu/estateplanning/documents/sampleaffidavit.pdf. 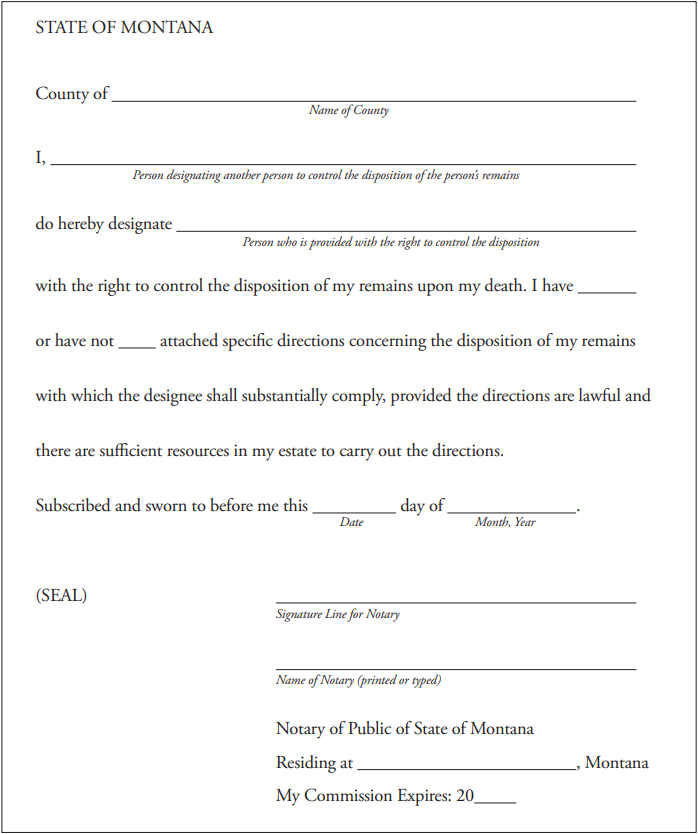 Who has priority for decisions about the disposition of remains?

If a Montanan dies without providing disposition directions in one of the four methods listed previously, then the authority passes to individuals in the following priority, provided that they are 18 years or older and of sound mind:

The survivors can choose at their own expense, arrangements for funeral services that do not conflict with the prepaid funeral contract, written instrument, video, or affidavit “disposition directions” of the deceased.

Loss of “right of disposition”

Under certain circumstances (as outlined below) a person can lose his or her right to make disposition decisions. If a person loses “right of disposition,” it is passed to the next qualifying individual.

Disputes among those sharing “right of disposition”

In making a determination about who has “right of disposition,” the district court considers several factors including:

Responsibilities of morticians, if there is a dispute

A mortician may act according to the instructions of the first person with priority to contact him or her unless and until others (such as children who share priority) notify the mortician of any objections in writing. A person who represents that he or she has priority as to “rights of disposition” is considered to be giving a warranty as to the truthfulness of his or her identity and authority. The Act protects morticians who rely in good faith on the instructions of an individual claiming a “right of disposition.”

The Montana Right of Disposition Act allows Montanans who are 18 years of age or older and of sound mind to direct the disposition of their remains and to arrange for funeral goods and services by any of the following methods:

The Montana statute lists a ranking order of individuals who can assume the “right of disposition” if a Montanan does not make prior arrangements. If a majority of the people with the right to make decisions cannot agree, they can file a petition for an order of disposition. The district judge then makes a decision about disposing of the deceased’s remains or determines who has priority to make the decision.

This MontGuide has been reviewed by representatives from the following who recommend its reading by Montanans who want to prepare for final disposition of their remains.

To download more free online MontGuides or order other publications, visit our online catalog at our store, contact your county or reservation MSU Extension office, or e-mail orderpubs@montana.edu.
Copyright © 2022 MSU Extension
We encourage the use of this document for nonprofit educational purposes. This document may be reprinted for nonprofit educational purposes if no endorsement of a commercial product, service or company is stated or implied, and if appropriate credit is given to the author and MSU Extension. To use these documents in electronic formats, permission must be sought from the Extension Communications Coordinator, 115 Culbertson Hall, Montana State University, Bozeman, MT 59717; E-mail: publications@montana.edu