Common tansy has a long history of medicinal use but has become a problem weed in pastures and along roadsides, fence lines and stream banks. This publication includes the most recent information on biology, ecology, history and management of this weed.

known as golden buttons and garden tansy, is a perennial herb in the sunflower family. This species, native to Europe, has a long history of medicinal use. It was first introduced to North America for use in folk remedies and as an ornamental plant.

The plants contain alkaloids that are toxic to both humans and livestock if consumed in large quantities. Cases of livestock poisoning are rare, though, because tansy is unpalatable to grazing animals. Human consumption of common tansy has been practiced for centuries with few ill effects, yet the toxic properties of the plants are cumulative and long term consumption of large quantities has caused convulsions and even death. In addition, hand pulling of common tansy has been reported to cause illness, suggesting toxins may be absorbed through unprotected skin.

Common tansy is an invader of disturbed sites and is commonly found on roadsides, fence rows, pastures, stream banks and waste areas throughout North America. It may threaten the ecological health of these areas through reduction in livestock forage, wildlife habitat and species diversity. Common tansy is listed as a noxious weed in Montana.

Common tansy is often confused with tansy ragwort (Jacobaea vulgaris), a poisonous pasture weed and statewide noxious weed. Tansy ragwort can be distinguished from common tansy by its ray flowers (petals) (Figure 4, page 2), absence of sharp toothed leaves, and the long fringe of soft white hairs found on the seeds. 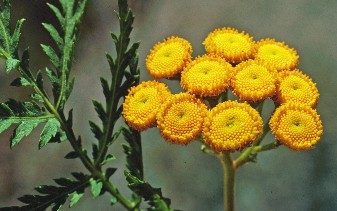 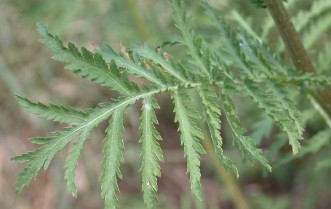 The first historical records of common tansy cultivation are from the ancient Greeks who used it for a variety of ailments. It was grown in the garden of Charlemagne the Great in the eighth century and in the herb gardens of Swiss Benedictine monks as a treatment for intestinal worms, rheumatism, fevers and digestive problems. In medieval times, common tansy in large doses was commonly used to induce abortions. Cases of cattle abortions in Pennsylvania have been circumstantially linked to common tansy, but this is not well substantiated. Ironically, smaller doses of common tansy were thought to prevent miscarriage and enhance fertility. Common tansy is still used in some medicines and is listed in the United States Pharmacopoeia as a treatment for colds and fever.

In addition to medicinal applications, common tansy has been used as an insect repellent from the Middle Ages to modern times. Research found oil distilled from the plants to effectively repel mosquitoes, though not as well as commercial preparations containing diethytoluamide. 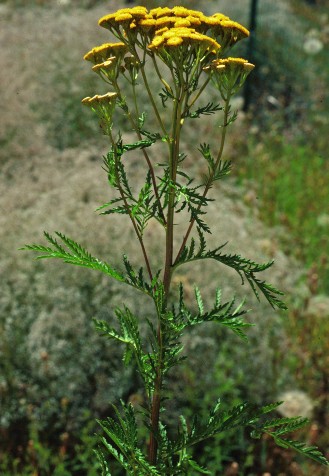 FIGURE 3. The stems of common tansy can be reddish in color, and the plant can grow 3 to 4 feet tall. Photo by Steve Dewey, Utah State University, Bugwood.org

Common tansy was also frequently used in early American history for funeral shrouds and wreaths. In 1668, the first president of Harvard University was buried wearing a common tansy wreath in a common tansy lined coffin. Due to its preservative properties, common tansy was commonly used in colonial America for packing meat and other perishable goods. This use has been substantiated by contemporary research which has isolated compounds with fungicidal and antibacterial properties.

Because of its popular uses, the governor of Massachusetts listed common tansy as a necessary plant for colonial herb gardens in the 1600s. This led to widespread cultivation of common tansy and the inevitable escape of the plants into fields and roadsides.

By the 1800s this weed was growing wild throughout the Northeast. In 1912, common tansy was reported as far west as Kansas and it was widespread in California by 1952. This weed was first documented in Montana in 1931 in Madison County. Common tansy now occupies fences, roadsides, ditch banks and other disturbed areas throughout temperate regions of North America. In Montana it tolerates a wide range of precipitation and temperature zones, giving it the potential to occupy almost every county in the state. 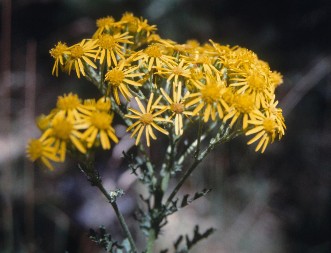 FIGURE 4. Tansy ragwort has yellow flowers with petals, termed ray flowers, in contrast to common tansy which only has disc flowers. Photo by Harlan B. Herbert, Bugwood.org.

Common tansy spreads mainly by seeds and from creeping rhizomes, to form dense clumps of stems. The roots are shallow but densely occupy the upper two feet of soil, meaning they’re highly competitive with other plants for soil nutrients and water. Each stem grows a cluster of numerous flowers during midsummer. These persist throughout the summer and into early fall. Pollination occurs through a variety of insects – flies, butterflies, moths and honeybees.

There has been limited research on control of common tansy. As with all weeds, prevention of the establishment and spread of infestations is the most cost effective management tool. This can be achieved by limiting disturbance of weed-free lands. Grazing should be limited to less than 60 percent defoliation of desirable grasses. This will limit opportunities for common tansy invasion. If livestock are grazed in infested areas, they should be maintained in a holding facility for several days to provide time for weed seeds to pass through digestive tracts and prevent spread of weed seed in droppings. Livestock, machinery or people that pass through infested areas should be checked for seeds, or other plant parts, before visiting uninfested lands.

The most effective herbicides for common tansy control are those containing the active ingredient metsulfuron (for example Escort, Chaparral, Cimarron X-tra). The Escort XP label recommends 1-2 oz per acre, but herbicide trials in northern Idaho found metsulfuron applied at 0.3 ounce per acre at the late bud stage yielded 99 percent control after three months and 98 percent control 15 months after treatment. A higher rate of 0.5-1.0 ounce/acre of metsulfuron can give three years control. Metsulfuron should always be used with a high quality, non-ionic surfactant to ensure penetration of the herbicide into plant tissues. This herbicide should not be used to control weedy infestations near water as metsulfuron is persistent in soil and has the potential to leach into groundwater. Accordingly, metsulfuron should not be used on any site where the depth to the water table is less than 20 feet. This limits the usefulness of this chemical for control of common tansy because the plants often grow near waterways.

Mowing or hand pulling provide alternatives to herbicide use near waterways and have been reported to marginally control common tansy. After removing as much of the rhizomes as possible, seeding with desirable, competitive species should help reduce reestablishment of common tansy. Mowing during the bud stage will prevent the growth of flowering stalks, limiting seed production and the spread of infestations by seed. If mowing is used, mower blades should be set high to limit impacts on desirable species. Hand pulling should provide similar results, but gloves and other protective clothing should be worn to prevent possible absorption of toxins through skin.

As a control measure, grazing with cattle will not reduce its prevalence because common tansy is unpalatable to cattle. To limit opportunities for common tansy invasion and spread, cattle grazing should be limited to less than 60 percent defoliation of desirable grasses. While more research is needed, observations from a Montana study using sheep suggest common tansy may decrease with season long sheep grazing, especially where perennial grasses are limited. No toxic effects of eating common tansy were reported in this study, but considering the congenital defects and reproductive failure associated with this plant, sheep should be moved off common tansy infestations four weeks prior to breeding and during gestation. If livestock are grazed in infested areas, they should be maintained in a holding facility for 14 days to provide time for weed seeds to pass through digestive tracts and prevent spread of weed seed in droppings.

Adequate control of infestations can be achieved through integrated methods including prevention, herbicides, and by mowing or mechanical removal. For more information concerning common tansy contact your local weed district or Extension office.

This information is for educational purposes only. Reference to commercial products or trade names does not imply discrimination or endorsement by Montana State University Extension.

To download more free online MontGuides or order other publications, visit our online catalog at our store, contact your county or reservation MSU Extension office, or e-mail orderpubs@montana.edu.
Copyright © 2022 MSU Extension
We encourage the use of this document for nonprofit educational purposes. This document may be reprinted for nonprofit educational purposes if no endorsement of a commercial product, service or company is stated or implied, and if appropriate credit is given to the author and MSU Extension. To use these documents in electronic formats, permission must be sought from the Extension Communications Coordinator, 115 Culbertson Hall, Montana State University, Bozeman, MT 59717; E-mail: publications@montana.edu